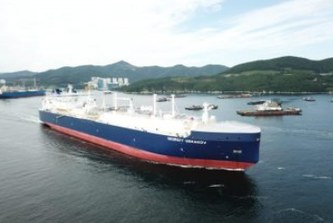 OAO Yamal LNG has announced the operational start of Yakov Gakkel, a new Arc7 icebreaking LNG carrier. As informed, the 172,410 cbm newbuild loaded the 354th LNG cargo in the port of Sabetta bound to China. Named at Daewoo Shipbuilding MarineEngineering (DSME) in South Korea in late March this year,Yakov Gakkel is the fifteenth and final Arc7 ice-class tanker built specifically for the project. Yakov Gakkel was recently delivered to Teekay LNG Partners, part of Teekay Group, as the last of six LNG carriers that have been handed over to the JV between Teekay LNG Partners and China LNG Shipping. Back in 2014, Teekay LNG Partners signed contracts with China LNG Shipping for the six units. They agreed that the LNG ships would be on charter to Yamal LNG project in Northern Russia, operating on the Arctic route and transporting clean energy from the Arctic to the Asian and Nordic regions. The project’s Arc7 ice-class fleet is capable of shipping all of the LNG produced given the increased performance of the first three LNG trains and the planned launch of Train 4.The presence of all 15 Arc7 ice-class vessels creates additional opportunities from 2020 for optimizing the project’s logistics both westbound and eastbound, including the more extensive use of the Northern Sea Route, according to Yamal LNG.
(Credits: worldmaritimenews.com)