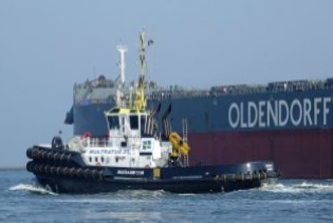 Germany-based dry bulk carrier owner and operator Oldendorff Carriers has signed a long-term coal transportation agreement (CTA) with the Bangladesh Chinese PowerCompany (BCPCL).Under the five-year deal,Oldendorff will provide a full transportation solution to BCPCL which includes coal transportation from Indonesia orAustralia with transshipment in Andaman&Nicobar to Payra power plant in Bangladesh.As explained, the coal transshipment will allow BCPCL to take advantage of lower freight costs using larger vessels to Andaman & Nicobar, and smaller vessels to BCPCL, due to draft restrictions at Payra Port. According to Oldendorff, the contract with BCPCL is split into two phases. Initially, there will be direct shipments from Indonesia to Payra Port requiring up to ten Supramax shipments per month.During the second phase, Oldendorff will carry coal on larger vessels and transship the cargo in the Andaman & Nicobar Islands. The cargo would be transshipped to Supramax vessels which would then deliver coal to Payra. Weather restrictions for transshipment in the Gulf of Bengal make transshipment impossible for at least four months of the year. The expected quantity of coal to be shipped will be between 3.8– 4.5 million mts per year. In January last year,Oldendorff successfully performed a trial transshipment operation in the Andaman & Nicobar Islands with the Trina Oldendorff. In that case, the final destination of the cargo was Haldia, India.
(Credits: worldmaritimenews.com)