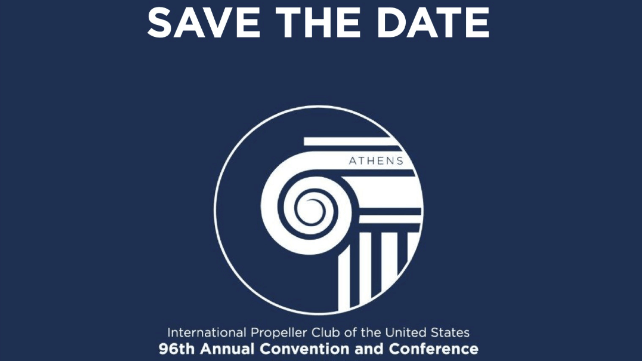 September 1, 2022-- The International Propeller Club – one of the world’s oldest international maritime organizations – will have its 96th annual Convention and Port President’s meeting in Athens, Greece at the Grand Hyatt Athens Hotel from September 20-22. The Propeller Club of Piraeus, Greece was founded in 1935 and is the oldest active Club outside the United States, and, in terms of membership, it is the largest Club in the world with over 700 members.

“Members are anxious to network and reacquaint themselves with maritime professionals from around the world, especially since the Covid-19 pandemic required virtual meetings in 2020 and 2021” observed Joel Whitehead, Executive Vice President of The International Propeller Club. “We look forward to the opportunity to celebrate the work of the Propeller Club in the home of our largest Club.”

The Convention will feature many opportunities for maritime professionals to learn about hot industry topics including six panels on topics of great interest to the maritime community: Current Geopolitical Events and their Impact on Trading Patterns and Energy Routes; Port Operations in Today’s Fast-Changing Environment; The Human Element: and Preparing for the Future in Maritime Education and Reskilling. Additionally, there will be two panels on Navigating the “NEXT” Stage of the Shipping Evolution Driven by Digitalization and Decarbonization and Sustainable Shipping.

Guests and spouses of Propeller club members will be invited to attend a guided tour of Athens with a visit to Acropolis Hill and the amazing New Acropolis Museum, focused on the archaeological discoveries at the Acropolis of Athens. The final day’s tour will be a guided tour of the Temple of Poseidon located at the tip of the Sounion Peninsula at the southernmost point of Attica. Made entirely of white marble, it was erected in the middle of the 5th century BC and dedicated to Poseidon, the ancient god of the sea. Members and guests will cap off the Convention’s activities with a cocktail reception and gala dinner at the Yacht Club of Greece in Piraeus.

The International Propeller Club was conceived in 1922 as an ever-growing group of maritime professionals met informally in New York each day over lunch to discuss issues of the industry. As the group became too large for casual conversation, speakers began to be invited to address the group. News of the club spread to other port cities, and Propeller Clubs were formed in Boston, New Orleans, and a student club at Yale University. On November 7, 1927, The Propeller Club of the United States was formed as a national and international organization, with individual member clubs designated as “Ports.”

Interested persons may learn more about the Convention here https://conference.propellerclub.gr/.